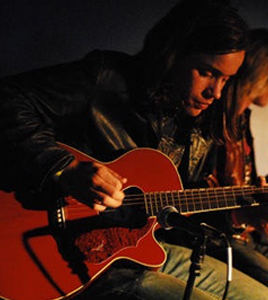 Alex earned a Bachelors degree in Guitar Performance from the Berklee College of Music.  He graduated with honors, completing the program a year ahead of schedule with performances in the Advanced Guitar Ensemble.

He has also released albums on Universal Music Group subsidiaries, toured the continental on LiveNation tours, while working with several Grammy award winning producers.  Alex became a fully accredited college professor at the age of 25, teaching for the music industry college Groove U in Columbus, OH.

– Columbus Finalist in Guitar Center’s BATTLE OF THE BLUES competition
– Winner of SchoolJam USA’s Best Teen Band in America. With performances in Los Angeles, CA at the NAMM Convention.
– Guitarist at the ShadowBox Caberet
– Acceptance to the Berklee College of Music
– Scholarship to the Berklee College of Music
– Band signed to EPIC RECORDS
– Acceptance to the Fort Hayes High School guitar program
– Opening support for Big Time Rush and Hot Chelle Rae
– Band signed to Jay z’s ROCNATION label at Sony
– Fill in guitarist for Beartooth
– Live performances at the CMA awards

click to enable zoom
No Service Available
No Documents Available